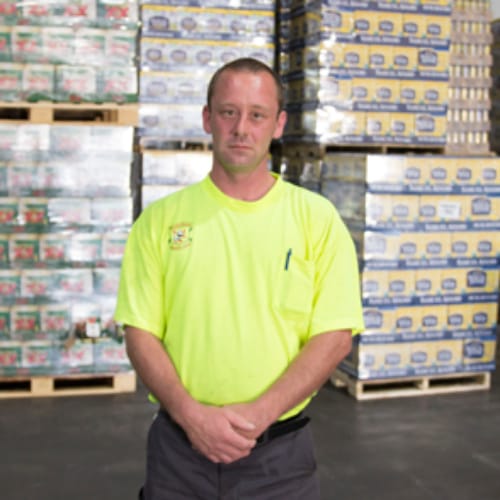 Every one who works for Heidelberg Distributing has a unique story. From where they grew up and went to school to how they got to their current location and ultimately how they came to work for Heidelberg.

Toledo Operations Associate Andy Ford grew up in the Toledo area in Millbury, Ohio and after graduating from Lake High School, he studied welding at a local trade school before starting that career.

Andy’s aunt and uncle ran a local catering business and were long-time customers of Heidelberg. “I was working for American Steel in Toledo in the welding field and was thinking about a career change,” Andy said. “During a conversation I had with their delivery driver, he mentioned that Heidelberg was looking for people.” That was November of 2008, and Andy has been with the company ever since.

At Heidelberg, Andy, as he puts it, does a “little bit of everything.” From pulling orders for Sales Associates, to shipping and receiving, logging in point-of-sale merchandise from suppliers and even making the occasional delivery driving a box truck; Ford is well versed in the ways of the warehouse.

When Andy is not working in the warehouse you can often find him taking advantage of the many bodies of water in the Toledo area. He is an avid outdoorsman, enjoying hunting, fishing and sailing.

When it comes to fishing, Andy says you can’t beat Lake Erie. “This area is without a doubt the best for perch and walleye,” Andy says. “I have my special spots but it usually depends on the day and the weather.” Once the catch is hauled in, it’s time for another northern Ohio specialty: the fish fry. “Lightly breaded and you fry ‘em up,” Andy says. “That’s the best way to do it.”

Every fisherman enjoys a good catch. Heidelberg Toledo got one in Andy Ford.