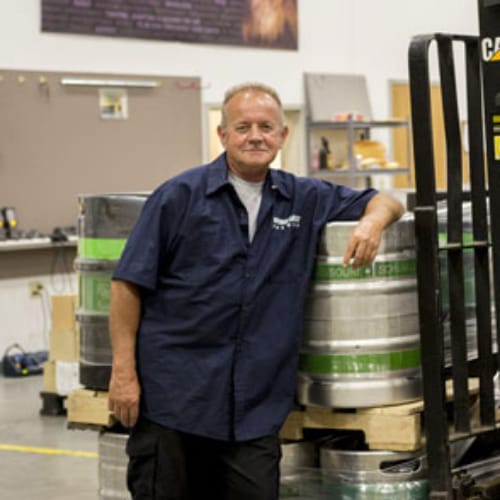 Greg Kroger recently gave up driving an over-the-road truck for Heidelberg to take a job inside the warehouse, but he still can’t believe that all those years of driving were accident-free.

He can’t even begin to think of how many miles he drove on U.S. highways, crowded city streets or country roads.

Greg’s first job was a daily route in downtown Cincinnati for Ohio Valley Wine & Beer Company. That lasted five years before he was asked if he wanted to pick up orders from breweries around the mid-west.

“I drove to Chicago and St. Louis and to towns throughout Indiana, Michigan, Ohio and more,” says Greg. “I think the longest haul was to Perry, Georgia, only 50 miles or so from Florida.

“I started with the company in 1978 and it’s been a great career. Everyone has been really good to me.”

Today Greg works with Team Kentucky, unloading supplier trucks, putting inventory into place and generally doing any job on a forklift. Occasionally he gets behind the wheel of a local truck (he still has a Class A driver’s license), but he’s glad to have those long-haul driving days behind him.

Greg and his wife bought a place “in the country” in Indiana, where they enjoy their two grown children and two grandchildren. They also love to travel, primarily to all-inclusive resorts, and their favorite spot is Cancun, Mexico.