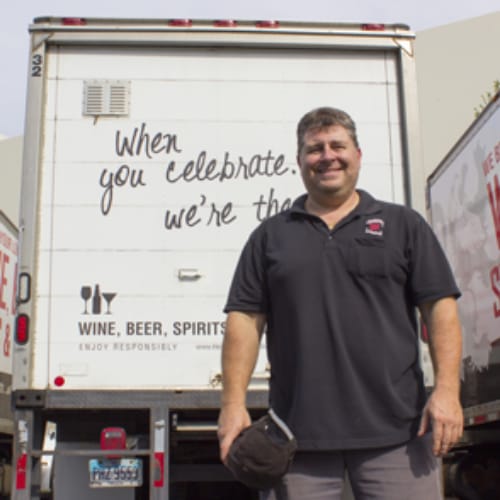 If you want to drive one of our 300 trucks in Ohio and Kentucky you need to be able to do so much more than navigate a truck from stop to stop. While driving ability is obviously a key component of the job, our drivers are also in contact with our customers on a daily basis making them one of our most important ambassadors for the company. That’s why we’re glad we have people like Greg Novak behind the wheel.

Greg drives a route in the western suburbs of Cleveland and in his 11 years at Heidelberg he’s found that the key to success is having a good relationship with his accounts.

“It’s more than just being courteous and being on time, though obviously that’s a big part of it,” said Greg. “I know all my accounts like the back of my hand. You’re seeing the same faces every day so you have to put in the work to get to know them.”

Greg delivers upwards of 1,300 units of product a week to around 35 different accounts. He says that it’s critical that you abide by their rules and put a smile on your face, even if you’re not having the best of days. He also says that on occasion he’s called on to help out the sales professionals.

“Accounts will sometimes ask me what’s selling really well, so I try to stay on top of what I have in my truck,” Greg says. “It’s typically the same products their sales rep has been telling them about but I think they sometimes like to hear a second opinion and I’m happy to give it. I want to help out in any way I can.”

When he’s not out on his route, Greg enjoys bowling, golfing, and playing softball but his favorite pastime is watching his son play baseball and football.