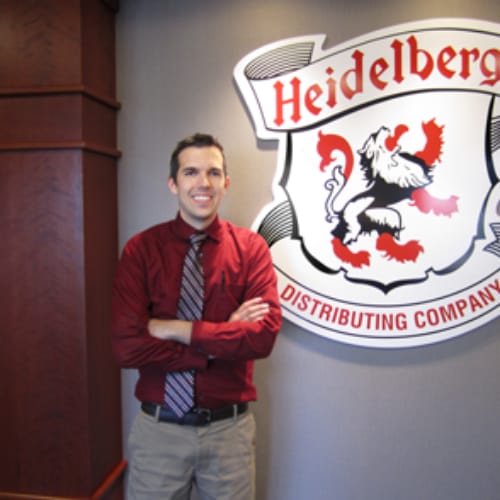 Without a doubt, we have some of the most knowledgeable sales professionals in the industry but they didn’t all come to us as experts in beer, wine, or spirits. Most arrive as fans of our products but it can take a while to reach the level of expertise that has become synonymous with Heidelberg. Of course, some are just naturals and find their way to the head of the pack in short order. In just nine months, Jordan Moore has done just that.

Although Jordan was a fan of craft beer before joining the company, he really wasn’t much of a wine drinker. That might seem like a problem since he was joining our Wine Division in Columbus, but for Jordan, it was just an opportunity to learn.

Prior to joining Heidelberg, he worked as a sales rep for a coffee company and he quickly started to see some crossover between his former product and wine. “Every little thing can affect the coffee bean, just like the grape,” Jordan explained. “The soil, the altitude, the air, the temperature – it all affects how both coffee and wine taste in the end. And the tasting notes once the coffee is brewed are actually very similar to wine. Chocolatey, fruity, berry notes, you name it. Once I realized how similar it was, it really helped prepare me to sell wine.”

This isn’t to say Jordan was flawless from the start. Like anyone who’s new to a job, in his first few months he made some rookie mistakes. Whether it was placing a display that didn’t quite fit the retail account or selling a wine that wasn’t a great match with a restaurant’s menu, Jordan had a few early missteps.

But now he sees them as an essential part in his growth as a sales professional. He built trust with his customers by owning up to his mistakes and doing everything he could to help find solutions. To Jordan, you can’t get better at your job if you’re not willing to make mistakes or ask questions from your colleagues who have seen it all.

“At the beginning I foolishly thought that I could figure it out by myself,” said Jordan. “When I started asking for pointers after those first few stumbles, I found that a lot of my coworkers had made the same mistakes and had solutions ready to go. So I guess my main advice to anyone starting in this industry is, ‘Don’t think anyone is going to think less of you because you didn’t know the answer to something, even if it’s a simple question.’”

In his spare time, Jordan is an avid soccer player and is one of the stars of Heidelberg’s indoor soccer team in Columbus.