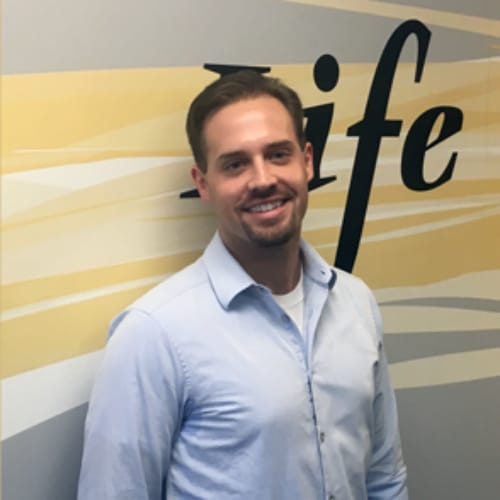 For Ohio Valley Wine & Beer Accounts Payable Associate Nick Padgett, his career choice should not come as a surprise to anyone who knows him. A self professed “money guy,” he got his first taste of the finance world while a student in Milford High School.

“I began taking business classes at the University of Cincinnati while still in high school,” said Nick. “I had a high GPA and was given the opportunity to take those classes while still attending Milford.”

By the time Nick graduated from high school, he had completed nearly half of his first associates degree. All told, he holds a bachelors degree in business administration from UC, as well as associates degrees in accounting, business management and marketing.

After completing his degree at UC, Nick began working at Ohio Valley in accounts payable. “I pay the breweries and wineries that we do business with,” says Nick. “Half of our work with suppliers is electronic transfers and the other half is still writing live checks. Another part of what I do is to make sure that we are getting what we are paying for. I’ll check for both pricing discrepancies as well as quantity discrepancies with our supplier partners.”

In January of 2018, Nick will celebrate three years at OV. As he has progressed with his career, his comfort level with the company and his position has continued to grow. “I like working with numbers, so it is always an interesting job,” Nick says. “It was definitely challenging when I first started but over time I have developed a routine and it has become easier.”

Heidelberg has 470 suppliers that provide products to the company. All told those suppliers provide over 18,000 products that the company handles. “Out all of our suppliers I probably deal with 200-250,” says Nick. “Thankfully the majority of them don’t have pricing issues. Most suppliers we deal with have pricing calendars that have already been set for the year so there are not usually surprises.”

When he is not working with supplier partners and paying for the products that Ohio Valley is send out to the company’s retail partners, Nick enjoys spending time with friends and family. “I love the outdoors, going swimming, shooting at area gun ranges, hiking and camping. Summertime is definitely my favorite time of the year.”