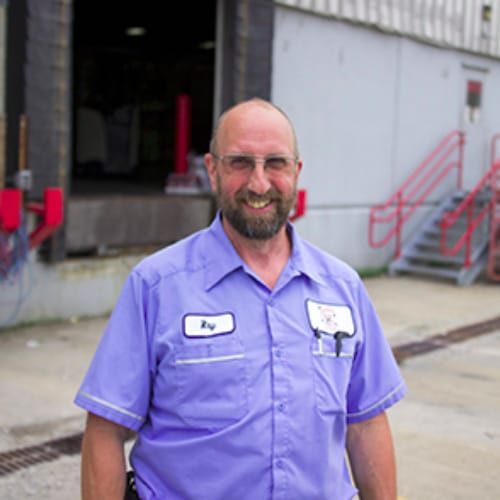 Over the last 19 years, Ray has done a little bit of everything in the Lorain operations department, from driving a delivery truck to working in shipping and receiving, to training new Associates and filling in wherever needed.

“I’m kind of the jack of all trades,” says Ray. “I do most of the training up here on tow motors, pallet jacks, as well as training the drivers on most of our northern routes. I can pretty much train anyone on any job in the warehouse because in my time here, I’ve had to do it all.”

Ray, who operated his own trucking company, started as a truck driver with Goodman Beverage, which became part of the Heidelberg Family in 2008. During one of his days as a fill-in driver, in 2013, Ray was featured on Heidelberg TV’s “Put-In-Bay Delivery” video, where it showed how the company delivers to an island. “I got all kinds of grief from the other op’s people about that one for a while,” Ray laughed. “I think they’re all just jealous that they don’t get to deliver on the island!”

“Since I started here, I’ve been able to fit in well and work with both management and the operations staff,” Ray says. “It really is a great family atmosphere, that’s what I like about it the most.”

When Ray is not on the job, you’ll probably find him at his house, hosting a jam session. “I play guitar, so my buddies and I get together at my house and play music,” says Ray. “In my basement I have a bar on one side and a full stage with a PA system on the other. Guys just come over and we play music.”

So will we see Ray delivering a route on Put-In-Bay by day and playing one of those same accounts he delivers to by night? “I’d like to,” Ray says with a smile. “But it probably won’t be happening anytime soon.”