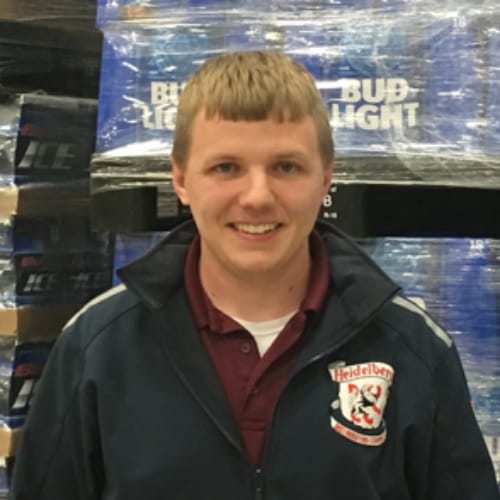 The first job that Dayton Inventory Manager Ryan Moore landed upon his graduation from the University of Cincinnati in 2011 was as an Operations Associate with Ohio Valley Wine & Beer. Ryan began on the night shift but was excited to get his foot in the door to what he hoped would turn into a career opportunity.

“I had just graduated from UC with a degree in operations management,” Ryan said. “I was looking for something that fit in with my education and the position with Ohio Valley was a great opportunity.”

After working the night shift for about six months, Ryan transitioned to the day shift at OV, doing stocking, receiving and inventory of product. On occasion he was even called upon to ride along with drivers and help on deliveries.

It wasn’t too long before Heidelberg presented Ryan with another opportunity. He was one of the Associates selected to assist the Heidelberg Kentucky operation when they made the move to their new warehouse and office facility in Hebron.

Ryan grew up in the Dayton area and graduated from Kettering Fairmont High School, so when he had the opportunity to move “back home” he jumped at the chance. He became involved in his second facility move when Heidelberg Dayton moved its operation from the north end to the south end of Dayton.

“Once I got a chance to work in the Dayton Warehouse, I was hoping that I was going to be able to stay there permanently,” Ryan said. “I’ve been in Dayton at the Dryden Road facility ever since.”

These days Ryan works as an Inventory Manager in the Dayton Warehouse specializing in the facility’s Anheuser-Busch operation. “It’s a big challenge making sure that inventory is accurate,” Ryan says. “Whether it’s sales and invoices getting run correctly or the Associates pulling product in the proper manner, it all effects the inventory.”

Working with a supplier that is as big in the industry as AB, Ryan says down time is not really a luxury and the warehouse is always busy. “It’s pretty much a constant work flow. With the brewery close by in Columbus, we get numerous loads of product through out the night. When our guys get here at 5:30 in the morning there are trucks waiting to be unloaded and we get the process going.”

When he is able to get away from the seeming never ending flow of product into the Dayton warehouse, Ryan relaxes outside of the office by spending time with his wife Ashlee and his family.