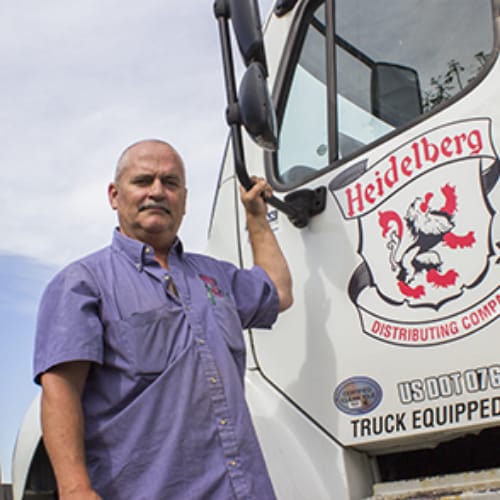 Driving is a skill that is mostly taken for granted in this day and age. Most people do it on a daily basis and because of that, it’s viewed as something that pretty much anyone can do. Take it from us, though, driving a box truck along the shores of Lake Erie during a January snow storm is not something that just anyone could do. It takes seasoned professionals like Scott Fortier to not only make all the deliveries, but do it safely.

“I don’t think enough people understand how tough it is to navigate these things in the snow,” said Scott. “Regular drivers figure that you’re a big truck so you must have big brakes. So in winter the name of the game is taking your time and making sure you get yourself to your stop in one piece.”

Scott’s route takes him to some of the snowiest counties in the country: Ashtabula, Lake and Geauga in the northeastern corner of Ohio. With Heidelberg’s Cleveland office located south of the city, on a good day it takes him an hour and half to make it to his first account.

Scott’s wife is a member of the Air Force so the two of them have lived all over the country including Alaska, Texas and Florida. Scott was driving one type of truck or another wherever he lived, so it’s safe to say that he has experience in just about every conceivable type of driving situation he could face.

But Scott is quick to point out that there’s much more to this job than driving a truck from stop to stop.

“You’re also handling money, checking invoices, and most importantly, you’re the guy they see the most from Heidelberg so you’re also doing a lot of customer service,” he said. “My rule of thumb is not to just drop and go. Do what’s asked of you plus a little extra; it will pay off in the long run.”

When he’s not driving his truck, Scott is an avid outdoorsman who loves to hunt and fish. He and his wife also own a little farm in Geneva, Ohio where they grow winter wheat and rye.