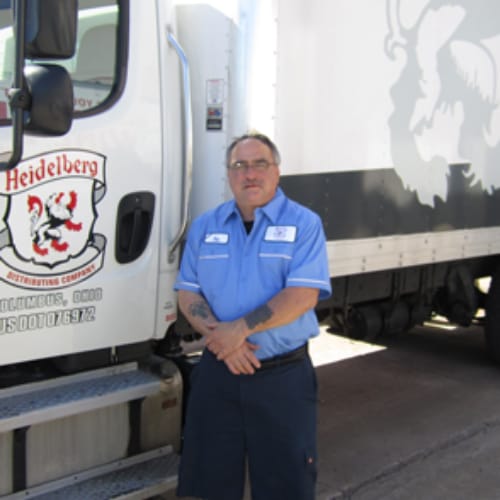 In his 13 years driving a truck for Heidelberg Distributing, Columbus delivery driver Tim Buhrts has covered both urban and rural routes of Heidelberg’s largest territory in Ohio. The Columbus facility delivers to accounts in 23 counties in central and southeast Ohio, the largest footprint of Heidelberg’s eight Ohio facilities.

One thing that hasn’t changed for Tim during his delivery route is his people skills. “I wake up happy everyday,” he says. “You have to be a people person in this line of work. I like all my customers and they like me.”

Tim spent two years with a city route in Columbus before getting placed on a southern route with more rural and “country” stops. There are days on his current route where he will put over 200 miles on his truck. “I’m in Chillicothe a couple of days a week and I also go to Jackson and Wellston,” says Tim. “I hit London (Ohio, not England) and West Jefferson as well, so I go west in addition to going south.”

Not only does Tim deliver Heidelberg’s products to the retailers on his account,  but he also serves as an ambassador for the company talking with retailers everyday. “Sometimes I’ll talk to my customers about products and sometimes they ask me about certain products we carry,” Tim says. “You get familiar with what you carry on the truck and know what’s hot by the volume of what is sold and what is delivered.”

Tim’s day begins while most of us are still asleep. He clocks in at 3:45 AM at Heidelberg’s Columbus facility before he heads out with his truck fully loaded for his first stop, sometimes over an hour away. “I get to my first stop around 5:30 AM,” he says. “When I’m on the road, I like to listen to sports talk radio or music and sometimes I just enjoy the drive.

He has a simple philosophy when it comes to his 13 years on the job with Heidelberg. Treat people the way you would like to be treated.

“Heidelberg has been good to me,” says Tim. “I couldn’t ask for a better group of bosses and I enjoy my customers, so that certainly has made it great.”