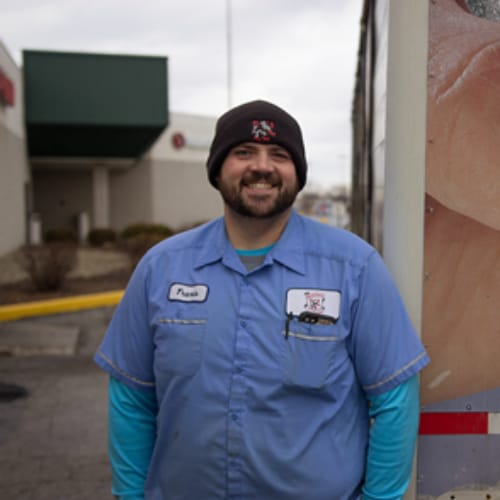 Heidelberg Lorain delivery driver Travis Dunbar by nature is a positive person. Over his seven years with the company, he has made it a goal to send positive vibes to the customers on his delivery route every day.

“If I can leave our customers with a great impression of our operation, then I have been successful,” says Travis. “Having a positive influence on our customer base is the potential first step to increasing our business.”

Travis, who has been driving his current delivery route for six years, has had time to perfect his positive outlook and outgoing personality to the accounts on his delivery route. “I have gotten to know all of my accounts very well,” says Travis. “It has certainly helped out knowing all of them on not only a business but a personal level.”

A self-proclaimed lover of the outdoors, Travis enjoys hunting and spending as much time outside as he can. “I enjoy hunting and anything I can do outside,” said Travis. “Another one of the reasons I really love this job is the physical work it demands. I would have a tough time in an office atmosphere. I need to be outside and moving around.”

Travis, who holds an associates degree from Hocking Technical College in wildlife management, began his working career with the Ohio Department of Wildlife, where he worked for three years. He then began his driving career with another Lorain area distributing before moving on to Mid Ohio Wines, which eventually became Heidelberg Lorain.

The majority of his time away from work is spent with his growing family. “I’ve got three kids and one wife,” Travis joked. “I absolutely love being a father.” Team Dunbar includes two daughters: ages three and two year as well as a newborn son, who was born in November of 2016. Plenty to keep him busy, happy and positive.