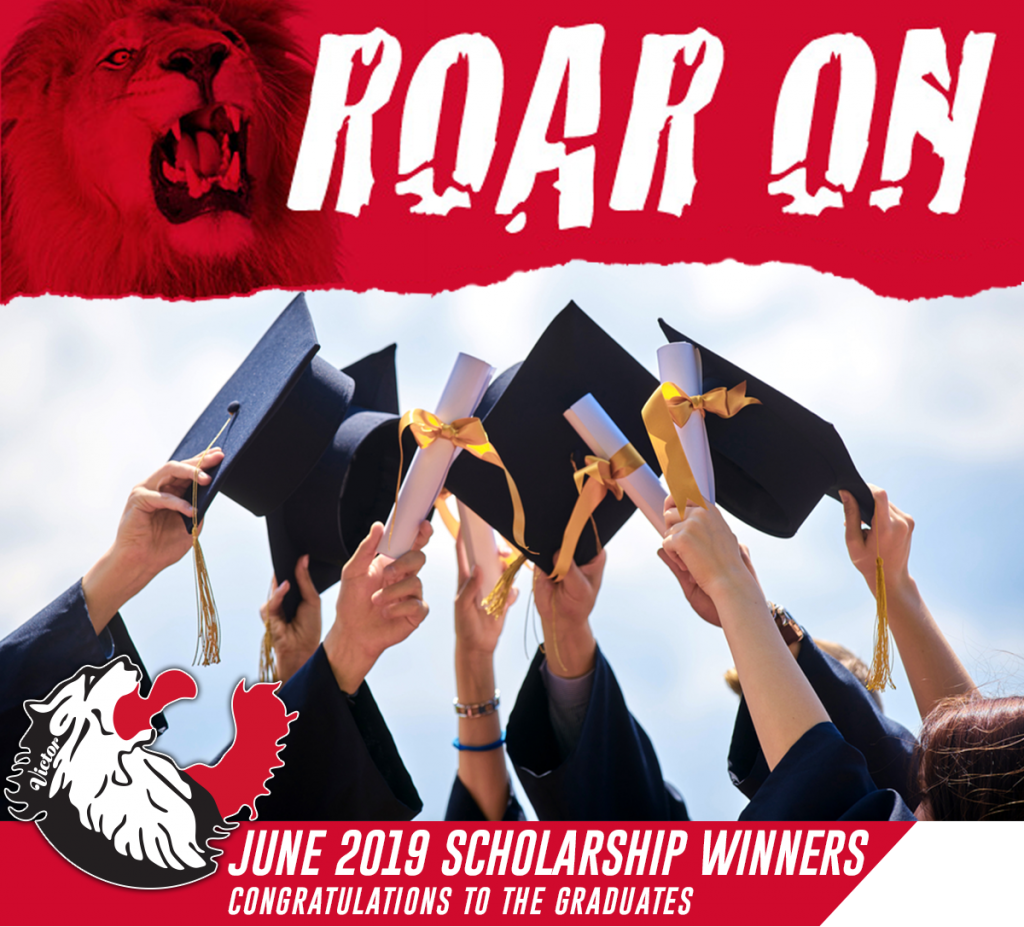 Eight children of Heidelberg Associates have been awarded a $3,000 Albert W. Vontz Jr. scholarship to the school or college or their choice for the 2019-20 school year.

Named after our founder’s son, Albert W. Vontz Jr., the program was initiated as a tribute to him during the company’s 70thanniversary in 2008. Unlike most scholarships, Heidelberg’s scholarship has NO minimum requirements on academic grades. Instead, the scholarship is awarded to students who give back to their communities through volunteer service. There is one scholarship per school year available in EACH of Heidelberg’s nine facilities and Wine Trends.

With the 2019 awards, the company has given away 82 scholarships totaling $152,000. Students can use the scholarship money for college, post-graduate or trade school education. Congratulations to all the 2019 winners!

Gabrielle Harget, daughter of Cleveland receptionist Connie Harget, has just completed her sophomore year at the University of Toledo. Majoring in social work, Gabrielle has been on the Dean’s List in her freshman and sophomore college years while volunteering at numerous charitable organizations.

Last year she was elected national Vice President of Philanthropy for Alpha Chi Omega, a sorority that focuses on domestic violence awareness. Gabrielle and her team hold fundraising events and volunteer at Toledo’s Bethany House. They also recently partnered with the local YWCA to assist victims who need food, shelter and job training. During her summer break last year Gabrielle also joined a church mission trip to Fayetteville, North Carolina, where she personally learned to help rebuild a home destroyed by the 2016 Hurricane. 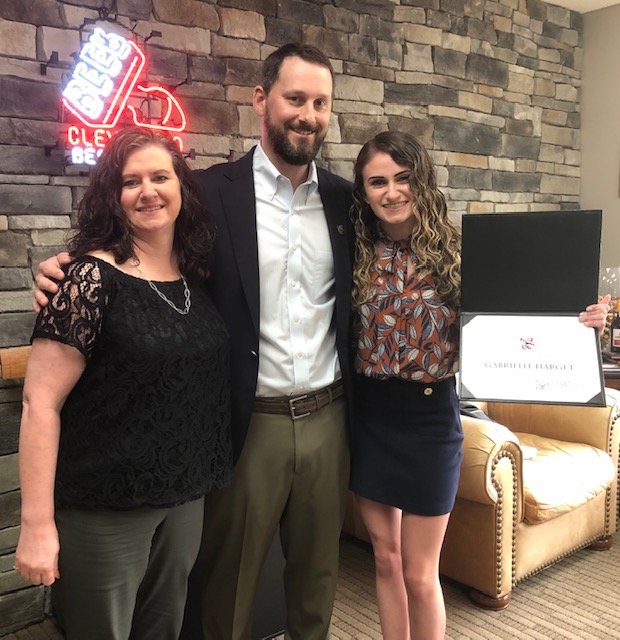 Jamie Darnell, daughter of Columbus receiving Associate Jimmy Darnell, just graduated from Gahanna Lincoln High School and has enrolled in Columbus State Community College. She currently is interested in either law enforcement or a medical services career. Jamie earned a high GPA throughout high school while volunteering at several local organizations about 10 hours each week.

She participated in almost every project for a local group called GRIN (Gahanna Residents in Need) including distributing meals, holiday gifts and backpacks and school supplies. Jamie also looks forward to working with the GRIN Summer Lunch Club for kids in need this year. 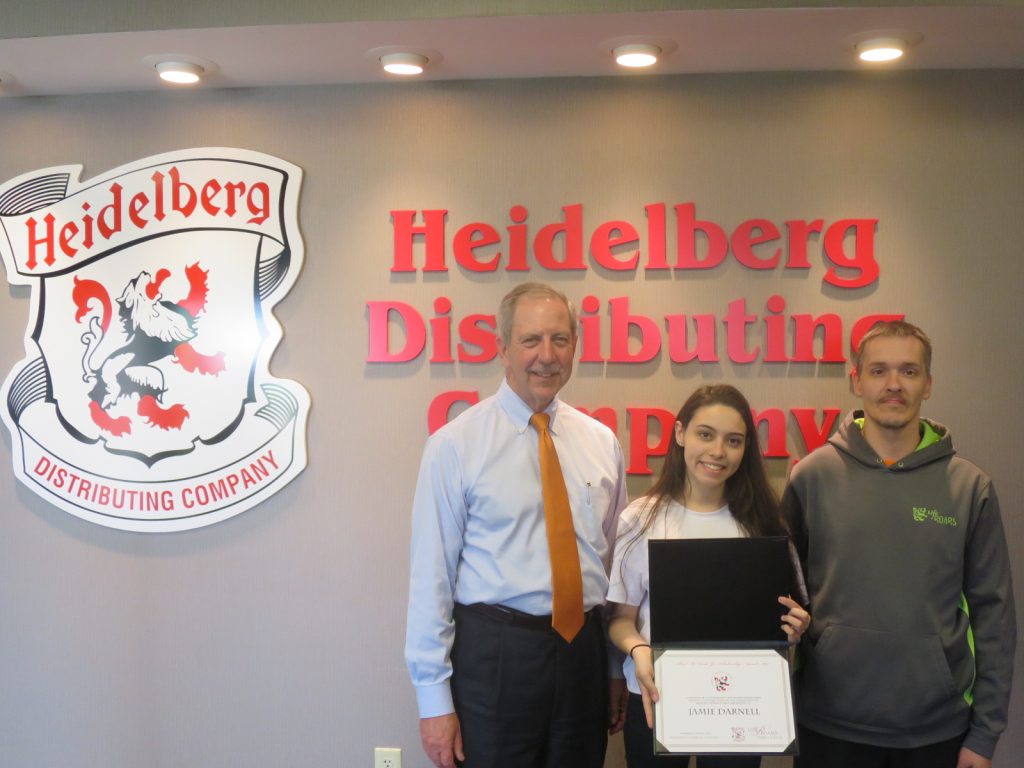 Zachary Brown, son of Lorain Wine GSM Rick Brown, spent his last two years at Marion L. Steele High School in Amhurst as a member of Ecoleague, a community service club dedicated to recycling and climate control. Members of the organization spent several hours each week recycling and cleaning up the school grounds and projects in the local community. They also helped educate students and staff about what items CAN be recycled (and HOW), and most recently began speaking to elementary age kids about recycling.

Zac is taking the knowledge and passion he developed from his volunteer work at Ecoleague to Lorain Community College (in partnership with Bowling Green University) where he will major in biology. He then plans to attend medical school to become a dermatologist. 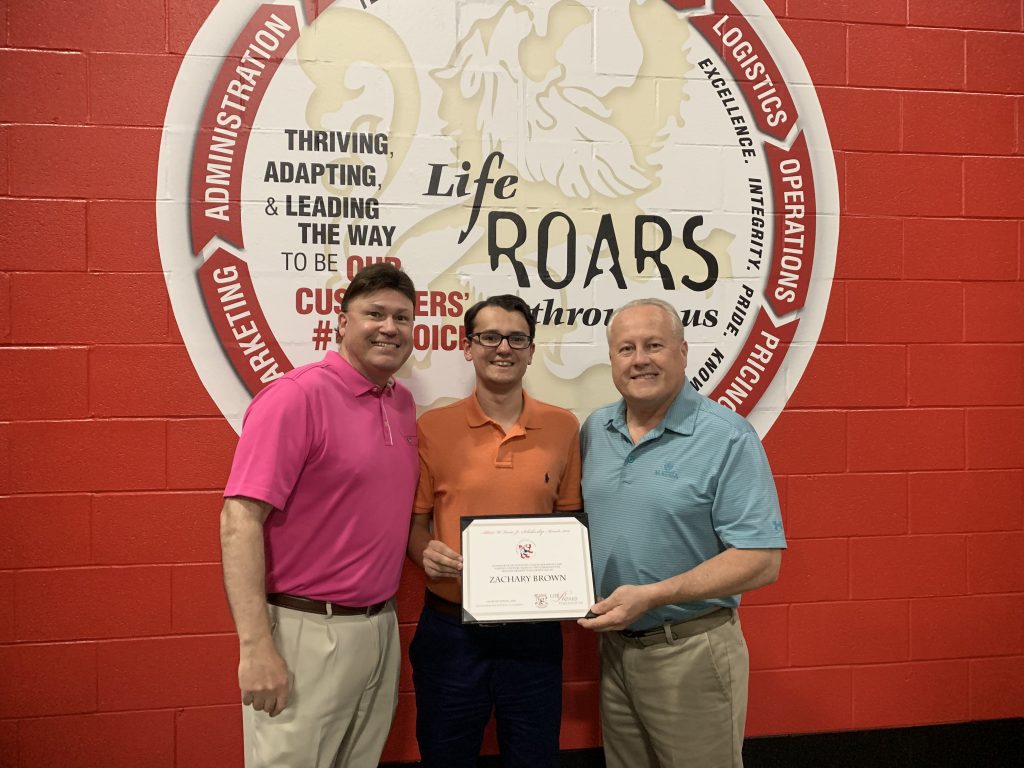 RICK BROWN WITH HIS SON ZAC AND GM KEVIN KNIGHT

Isabella Lohmiller, daughter of Area Manager Lance Sims of the Cincinnati Anheuser-Busch division, has just completed her freshman year at Ohio University in Athens where she is a business pre-law major. When she graduated from Seton High School, Isabella received the Principal’s Scholastic Award for having a high GPA while playing sports and the Coach’s Award for being the most coachable athlete. President of the Student Council, she was on the Honor Roll all four years while working part-time and playing on the soccer team.

Isabella has been a passionate volunteer since her elementary school days but is most proud of her two summer mission trips to help Mennonite farmers in Liberty, Kentucky. Her student group assisted families in planting farm crops and clearing land to prepare for farming. 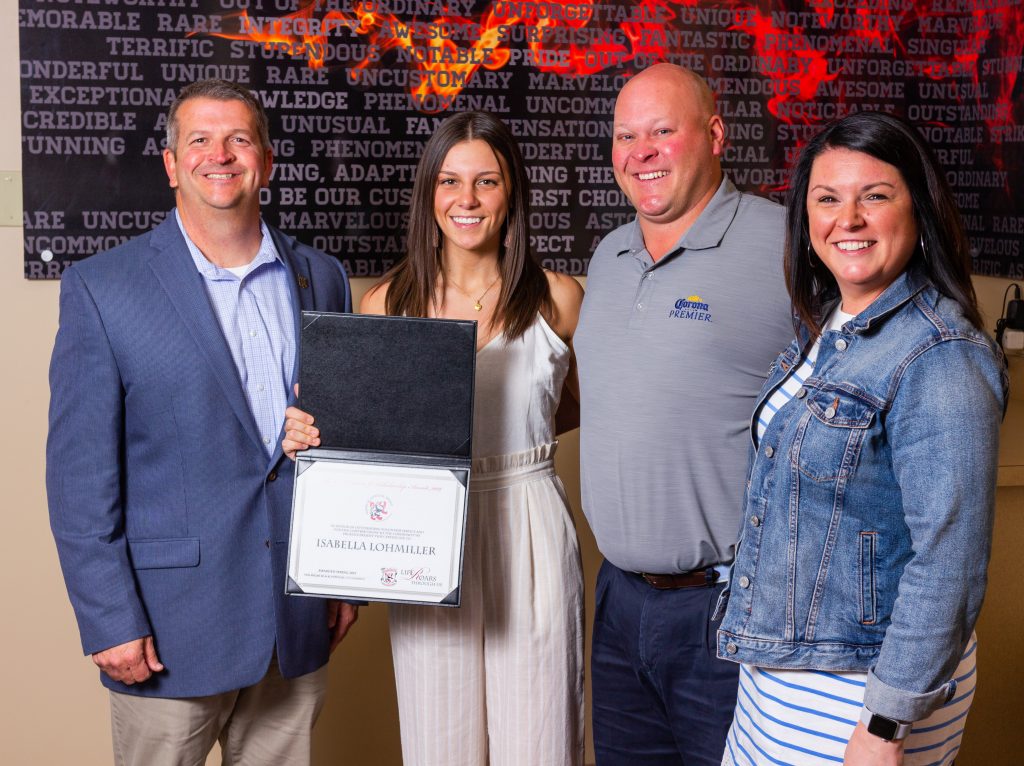 Reily Mulholland, daughter of Wine Trends Regional Manager Nicole Mulholland in Toledo, will be a senior at the University of Toledo in the Fall. She will graduate with a Bachelor’s degree in English Literature after making the Dean’s List every year and has a goal to pursue a Master’s degree in education or child psychology.

Reily volunteered with numerous organizations in high school but believes her biggest contribution was as a counselor last summer at Camp Michigania. She worked with different ages of kids each week (seven to 17) and the experience cemented her belief in the need to guide and educate kids and teenagers. 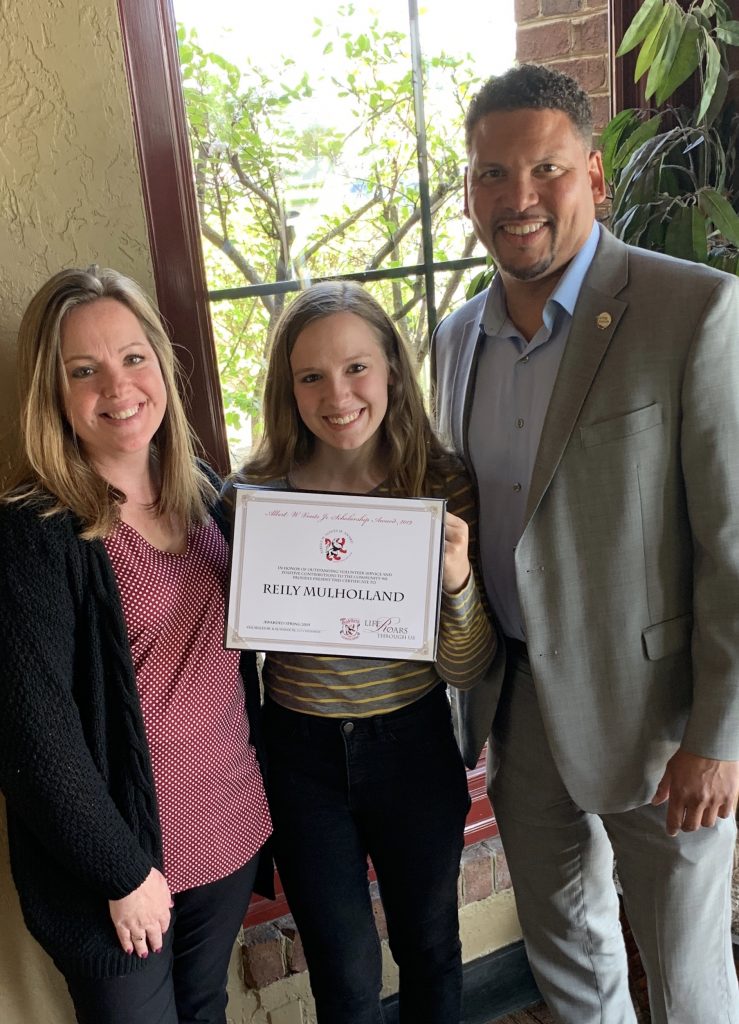 Her biggest volunteer project was with the school’s Key Club, helping to organize and run the annual Turkey Drive for two years. Students and staff donated so much food and money for turkeys that they were able to distribute meal boxes to three local charities in time for Thanksgiving.

Stephanie will attend Ohio Wesleyan University in Delaware Ohio and plans to major in business and psychology. 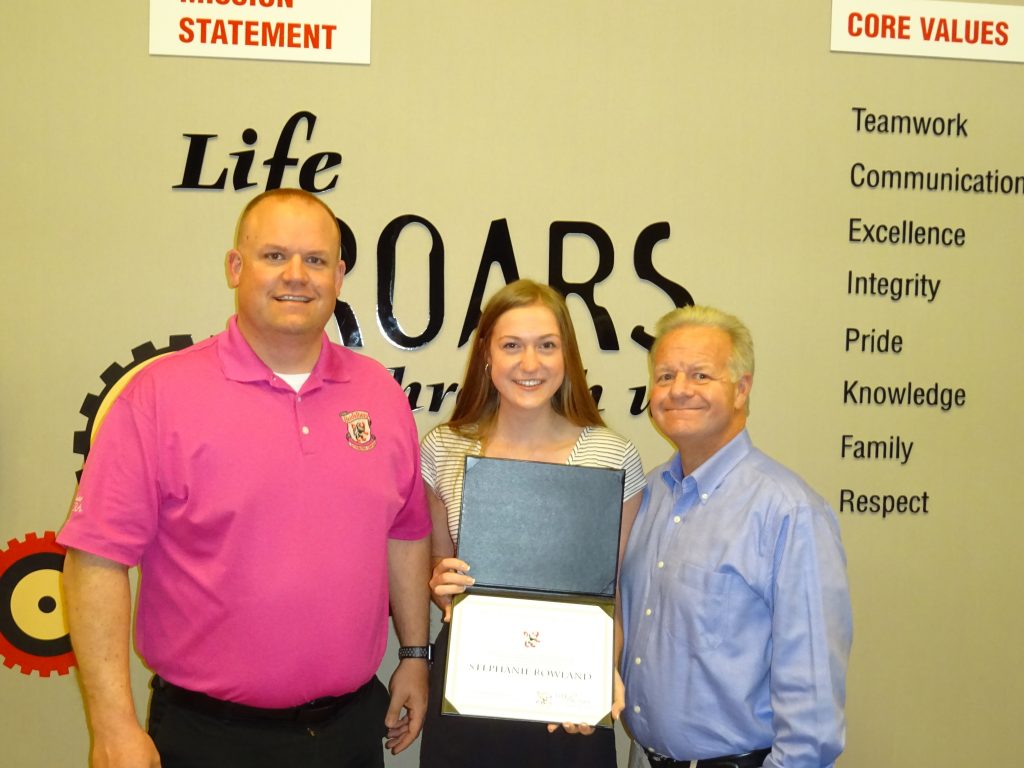 She volunteered 10 hours every week during the school year at two local long-term care facilities, The Manor of Perrysburg and Otterbein. She assisted elderly residents with their personal needs and daily chores and helped out the staff. The experience solidified the decision to make healthcare her future career.

Taylor will attend Lourdes University in Sylvania, majoring in nursing and minoring in psychology. 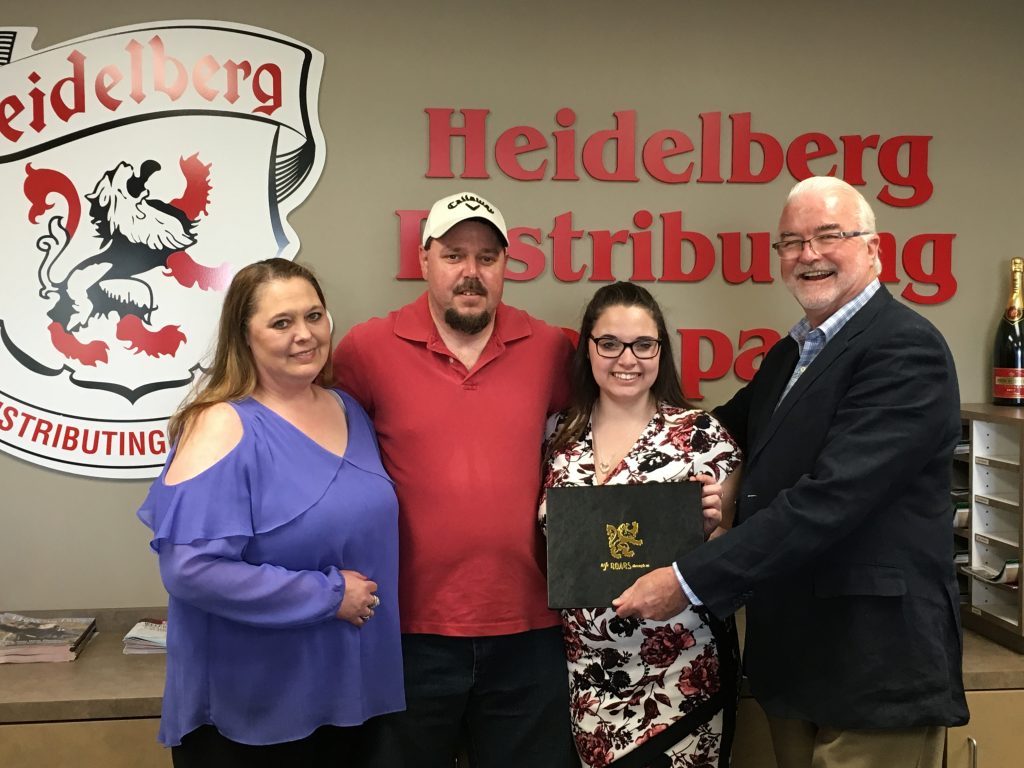 Chloe Keith, daughter of Director of Spirits Marketing Pat Keithat our Ohio Valley facility, just graduated from Kings High School where she excelled at academics as well as track and cross-country teams. Among other organizations, Chloe volunteered at the Cincinnati International Wine Festival this year, preparing items for the silent auction. Because the Festival contributes to 35 local charities, Chloe was inspired to start up a new chapter of Girl Up at her high school, part of the United Nations Foundation to provide access to education for girls in developing countries.

Chloe will attend the University of Missouri in Columbia, Missouri and major in journalism. 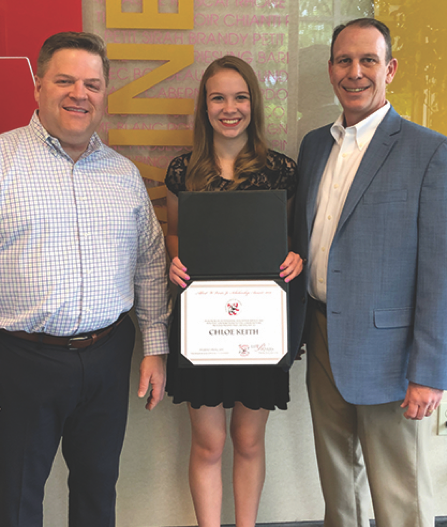