→ Every Friday we salute an Associate who demonstrates our core values by posting his or her photo and background on Heidelberg’s social media channels Facebook and Twitter. Congratulations to these Associates who were featured in May:
May 1: Tom Nunamaker, Operations – Cleveland
May 8: Sallie Baker, Supplier Accounts Receivable – Ohio Valley
May 15: Ryan Coyier, Operations – Youngstown
May 22: Maggie Ready, Sales Pro Wine Trends – Cincinnati
May 29: Joe Lanning, Receiver/Transfers – Toledo

→ Former Ohio State Football Coach Urban Meyer was a surprise guest joining in on the May 1, Covid-19 Communications Zoom call. Meyer, a three time national championship winning head coach joined in the call and talked to the Heidelberg team about: “Taking responsibility and ownership for your actions; finding a way to win and how there is no substitute for hard work.” A big thank you to Justin Wise, Columbus Wine DM for helping to set up a great call with Coach Meyer! 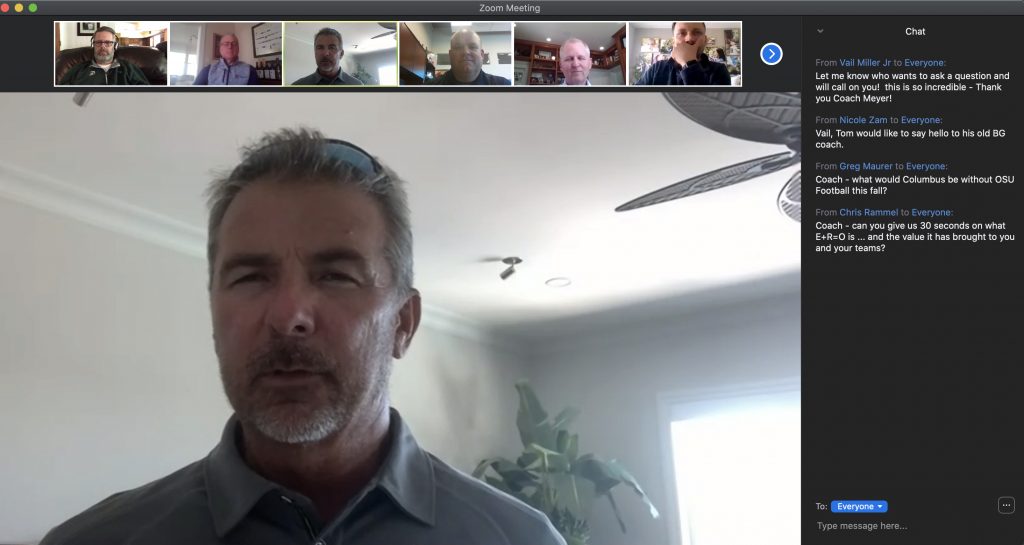 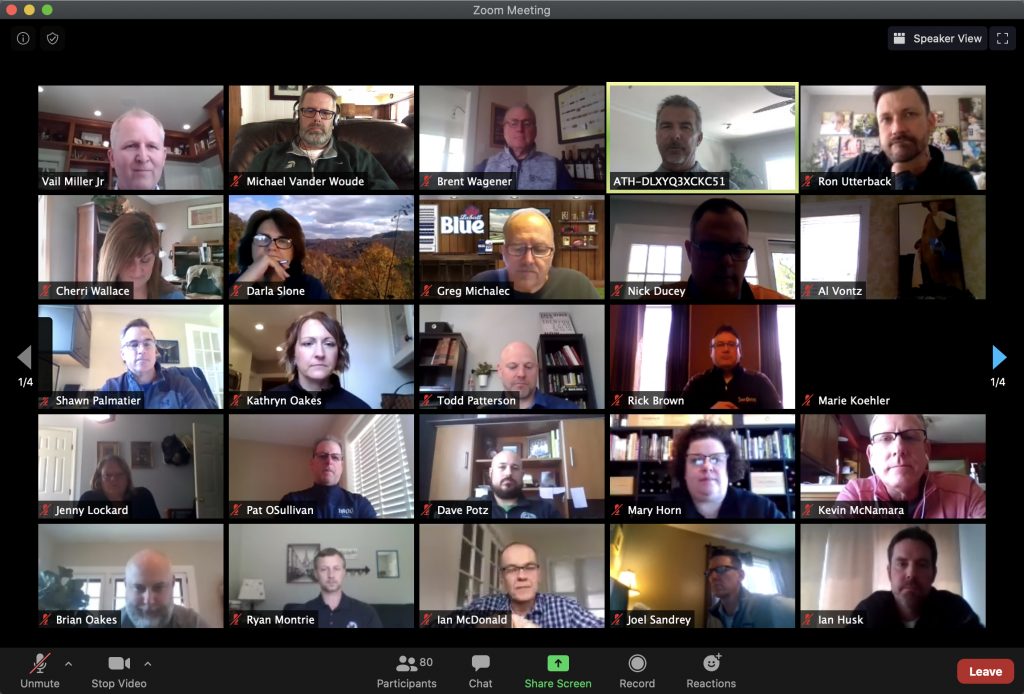 80 ASSOCIATES GOT A FIRSTHAND LISTEN TO COACH
MEYER’S MOTIVATIONAL MESSAGE AND THEN HAD
AN OPPORTUNITY TO ASK COACH SOME QUESTIONS.

One of the things that we talk about within the Heidelberg family is being able to showcase our Associates as being experts in their fields. During the COVID-19 crisis, we got an opportunity once again to see that knowledge firsthand and were able to have a little fun within the process! 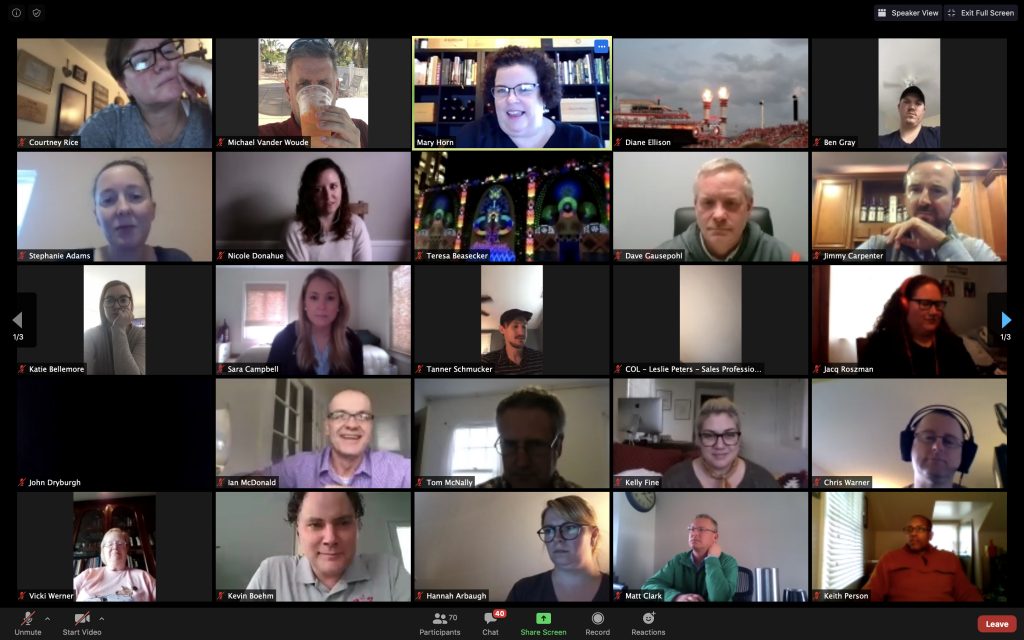 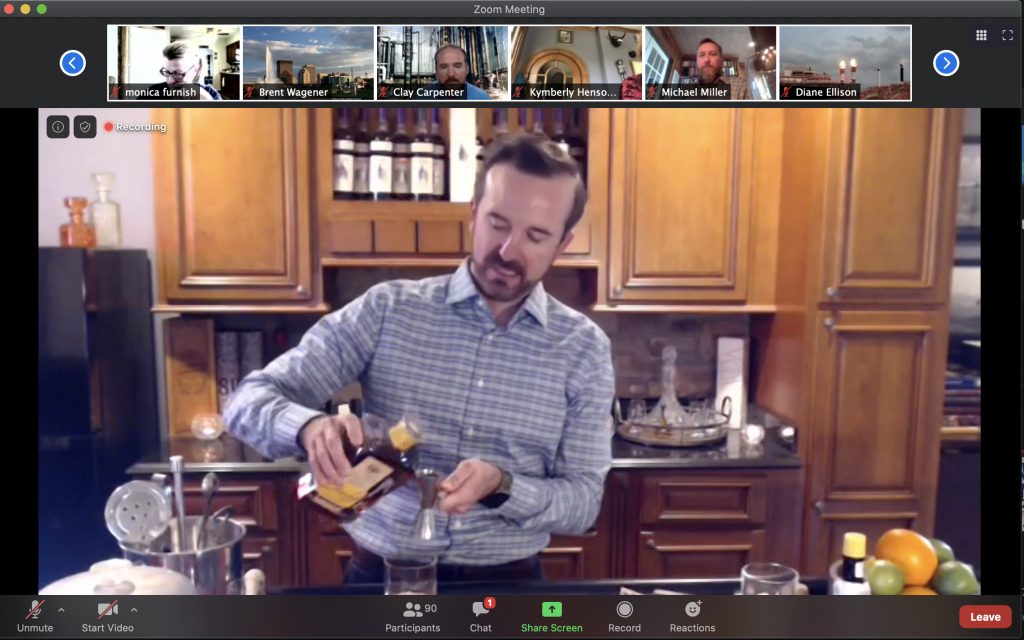 JIMMY CARPENTER POURS OUT A MEASURED SHOT OF BOURBON
DURING HIS OLD FASHIONED COCKTAIL TUTORIAL.

→ Former Ohio State Football Coach and current Youngstown State University President Jim Tressel joined the May 18, Covid-19 Communications Zoom call. Tressel won four Division 1-AA National Championships as the head coach of YSU before winning the 2002 National Championship with the Buckeyes. The 2002 Buckeyes became the first major college football team since the 1897 Penn Quakers to achieve a 14-0 season. He became the President of Youngstown State in May of 2014.

President Tressel’s message to Heidelberg focused on starting with a plan and adjust it as you move along. Your plan must always include hard work, as there is no substitute for hard work. How you handle both adversity and success impacts your plan. Finally, in order to be successful, you need to believe in the plan that you have laid out. 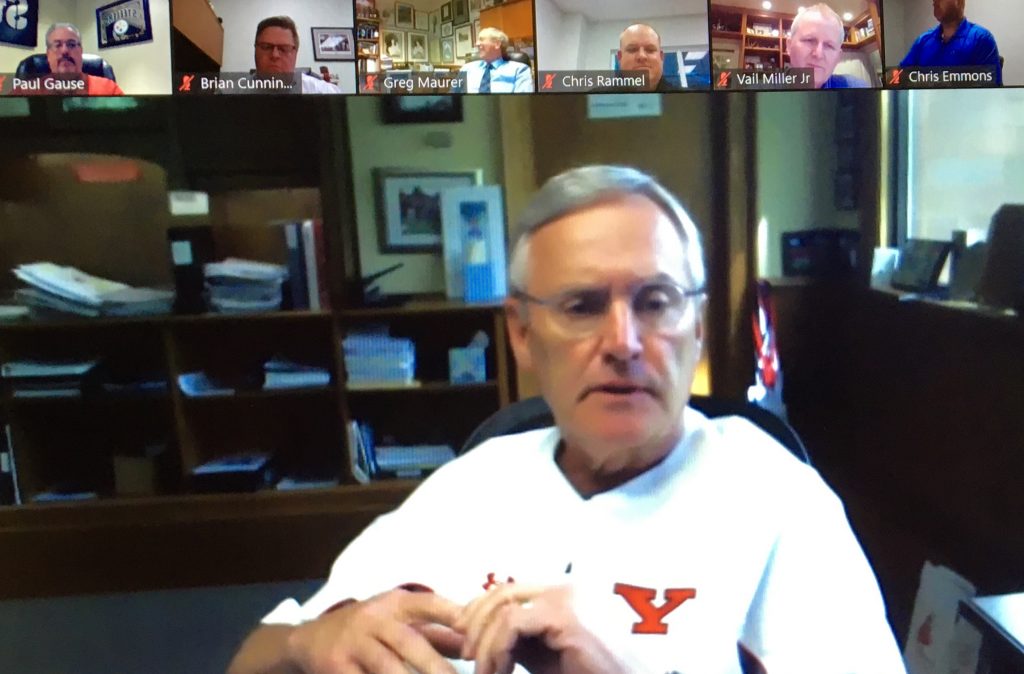 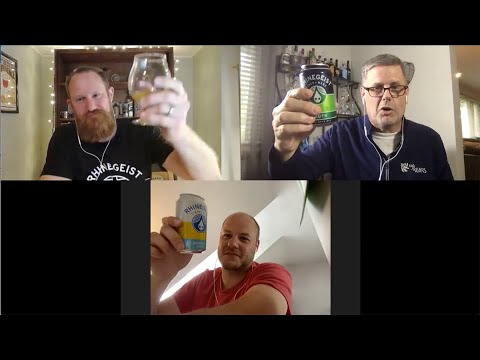 F-16 FALCONS FROM THE 180TH FIGHTER WING OF THE AIR NATIONAL GUARD
BASED IN SWANTON, OHIO FLEW OVER HEIDELBERG AS PART OF OPERATION
AMERICAN RESOLVE, HONORING OHIO’S HEALTHCARE WORKERS, FIRST
RESPONDERS AND THOSE ON THE FRONT LINES OF CORONAVIRUS.

→ Light Ohio Blue works to honor and pay respects to the law enforcement officers who have died in the line of duty as well as those currently serving. Each year in May they work with several Ohio businesses to light the city skylines blue. Thanks to Operations Director Terry Neece, Operations Associate Parrish Lewis and General Marketing Manager Laura Elking for their work on this project. 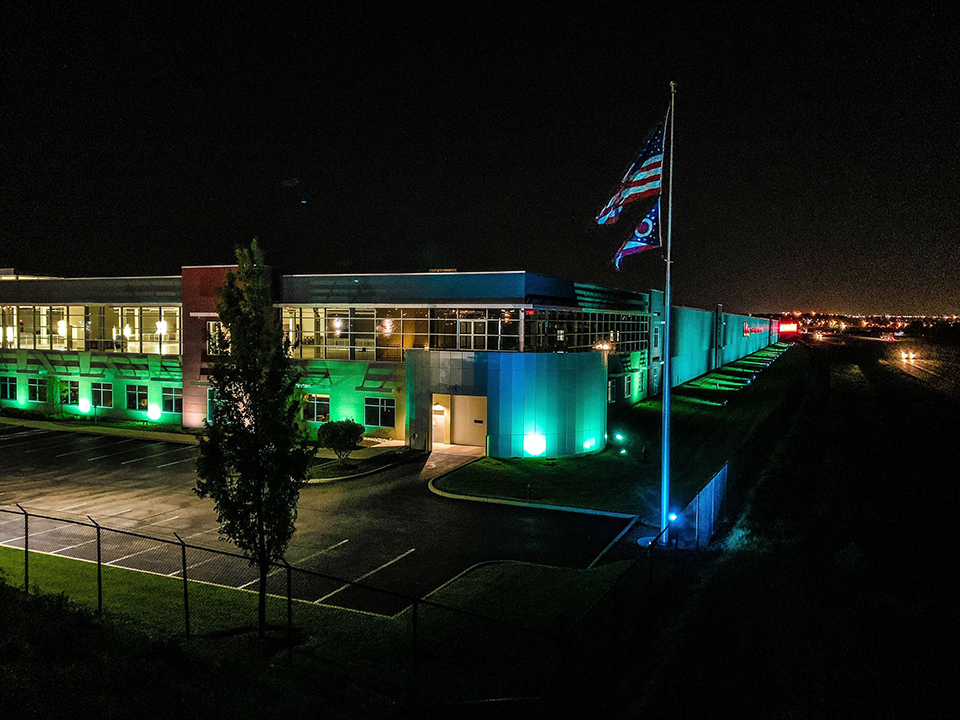 THE DAYON BUILDING WAS LIT BLUE IN HONOR OF LIGHT OHIO BLUE WEEK (MAY 8-15)
TO HONOR LAW ENFORCEMENT OFFICERS KILLED IN THE LINE OF DUTY. 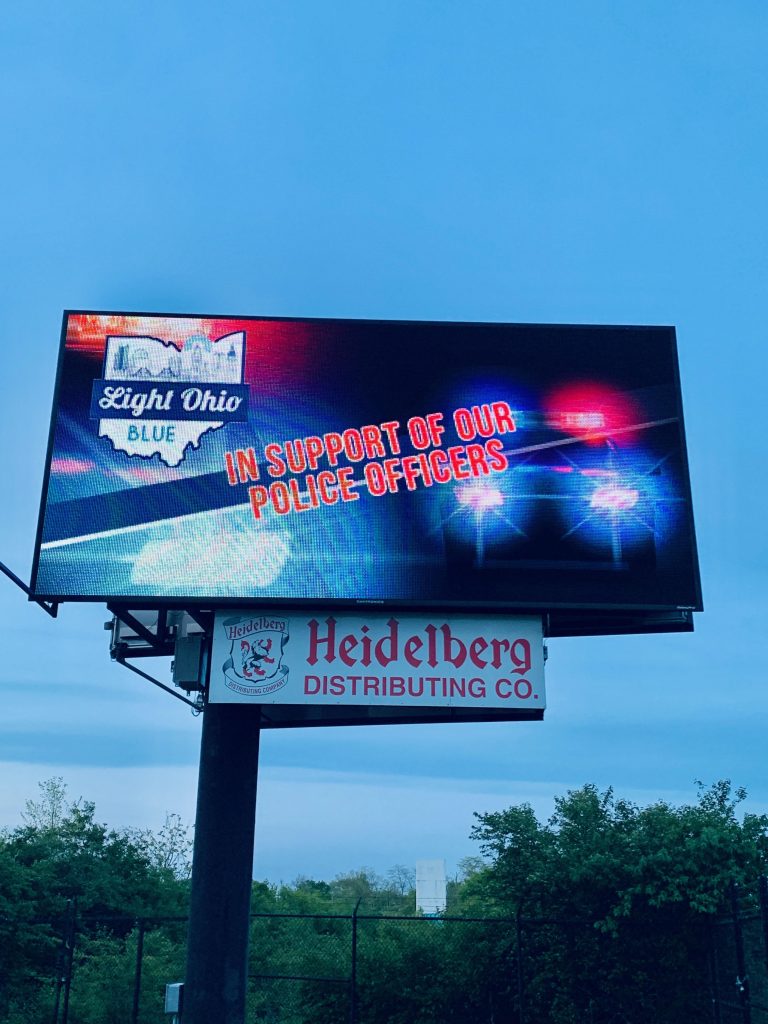 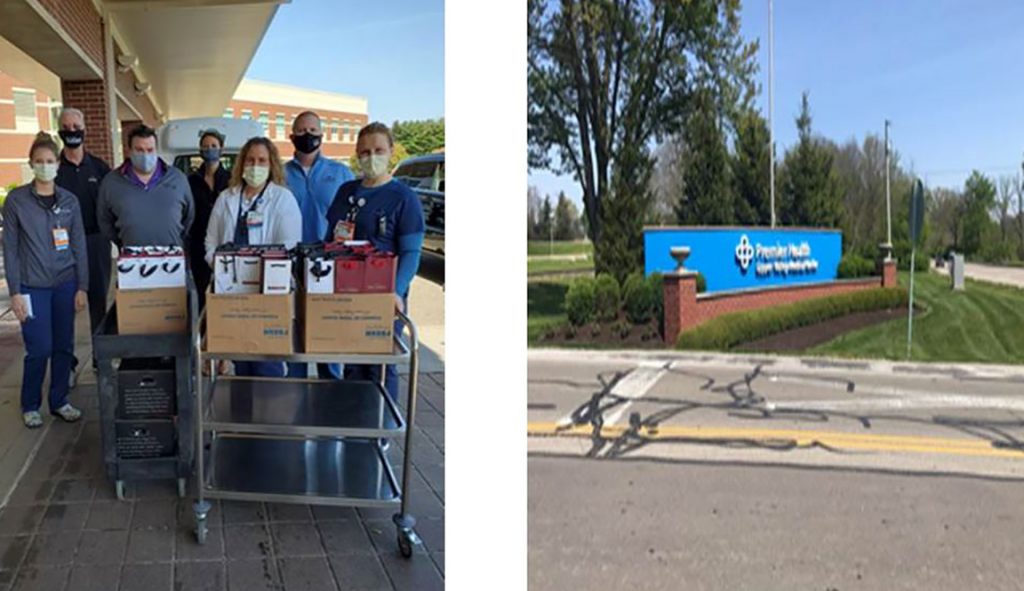 HEIDELBERG AND GALLO DELIVERED BOX LUNCHES AND ESSENTIA WATER TO
UPPER VALLEY MEDICAL CENTER AS A THANK YOU FOR THEIR WORK DURING
THE PANDEMIC. THANKS TO WINE GSM CHRIS LENNON, ON PREMISE MARKET
MANAGER DOUG HILL AND SALES PROFESSIONAL ERIN LANGENKAMP
FOR SETTING UP THIS EVENT!

→ With the admin team out of the office on May 4, the beer team decided to get some Cinco de Mayo decorating done to kick off the celebration! 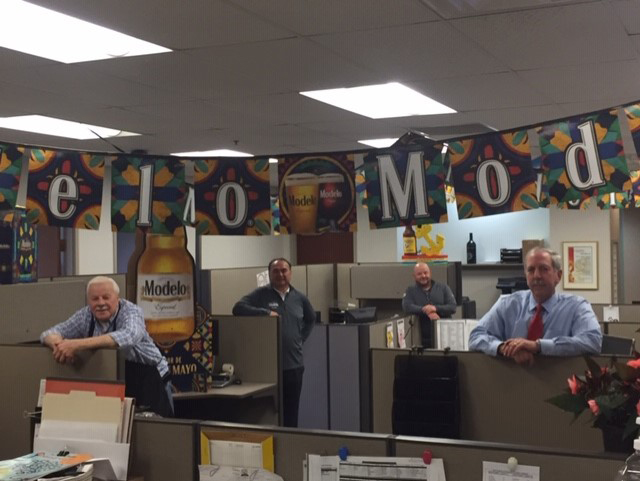 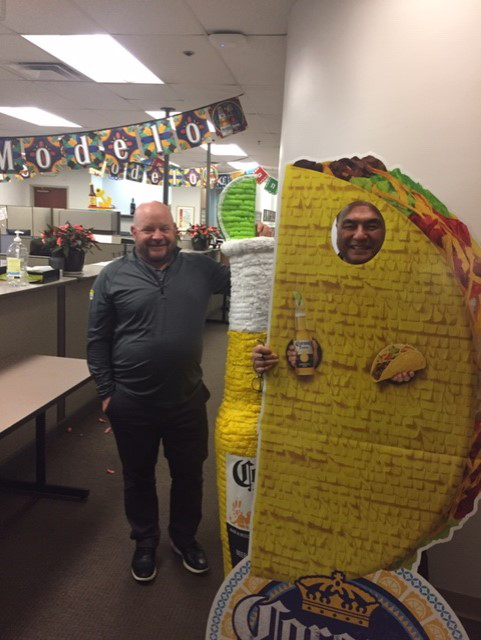 → On Wednesday, May 13 Heidelberg Columbus was able to see the Ohio Air National Guard on their way to do their flyovers at area hospitals. The Ohio Air National Guard flew two F-16 fighters and a KC-135 refueling plane over hospitals, as a way to thank front line workers. The Columbus based 121st Air Refueling Wing joined the Swanton, Ohio based 180th Fighter Wing in flying around Columbus. Thanks to Admin Associate Paulena Robbins for her photo! 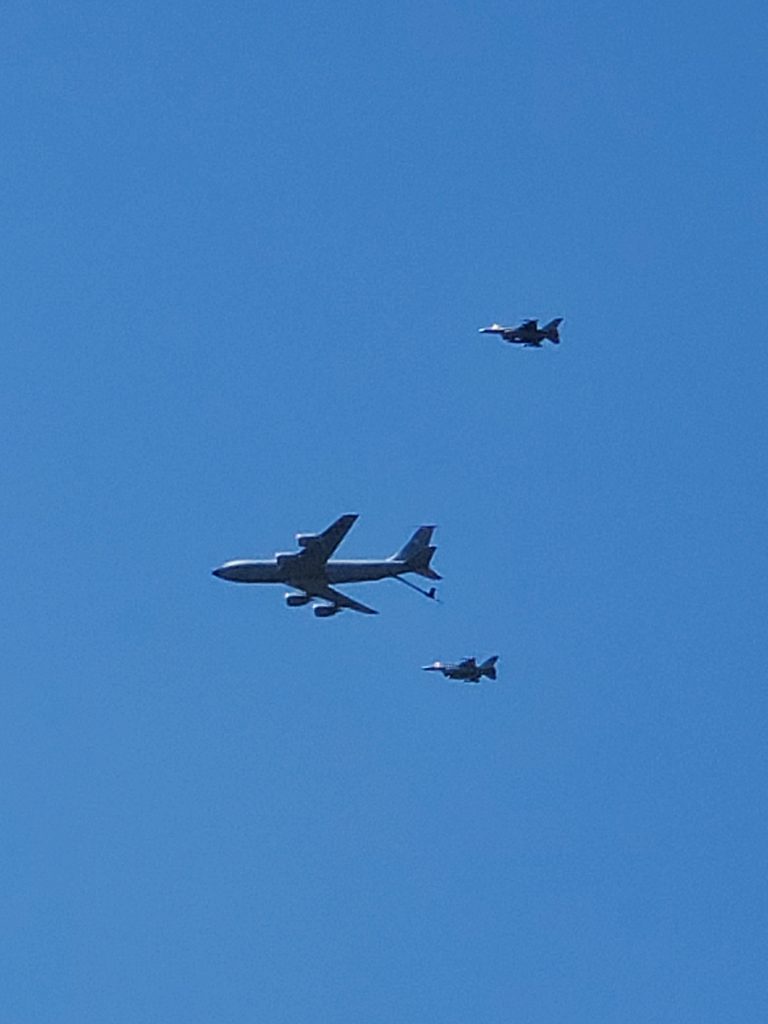 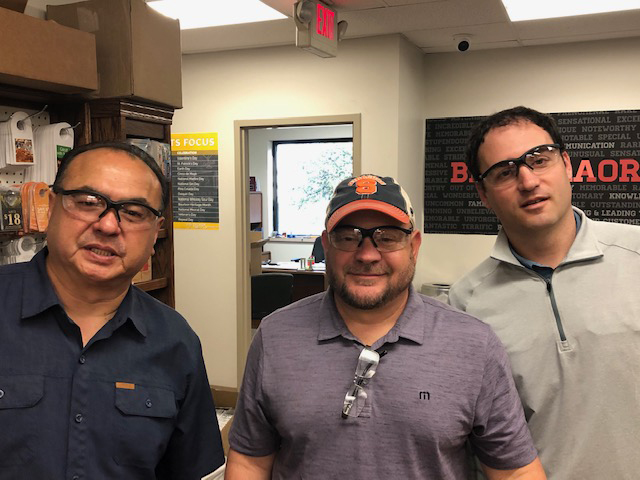 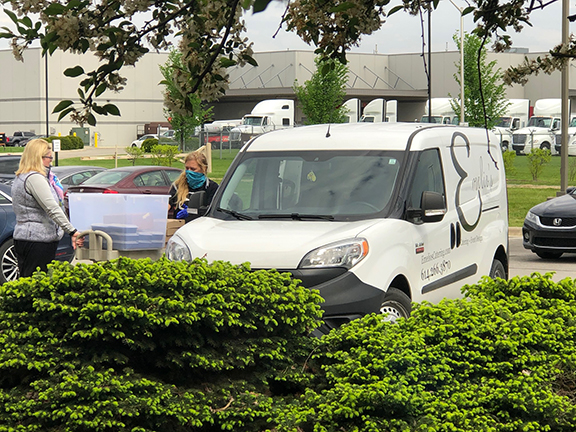 ADMIN MANAGER VICTORIA BORK PICKS UP LUNCH FOR THE OFFICE FROM
EMOLIO’S PIZZA TO CELEBRATE THE END OF ANOTHER WEEK. 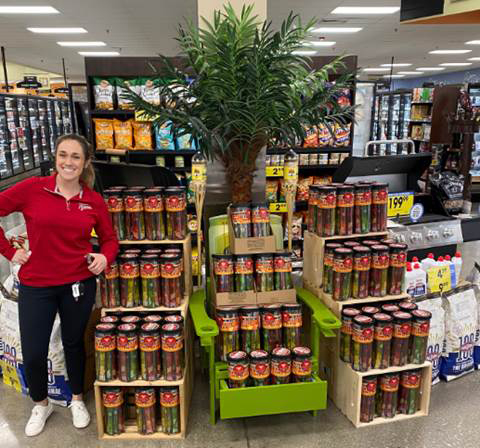 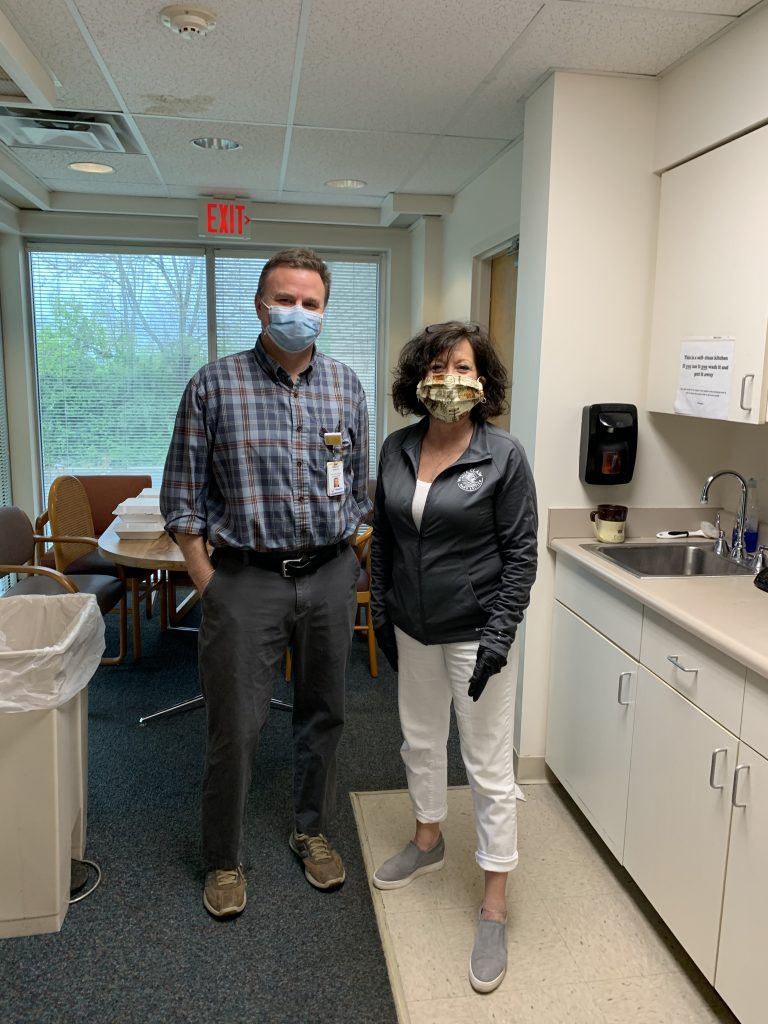 OV DELIVERED LUNCH TO TRI-COUNTY OCCUPATIONAL MEDICINE TO THANK THEM
FOR ALL THEY DO FOR OHIO VALLEY. ADMIN MANAGER MARIE KOEHLER POSES
WITH DR. TIM HENKE FROM TRI-HEALTH. 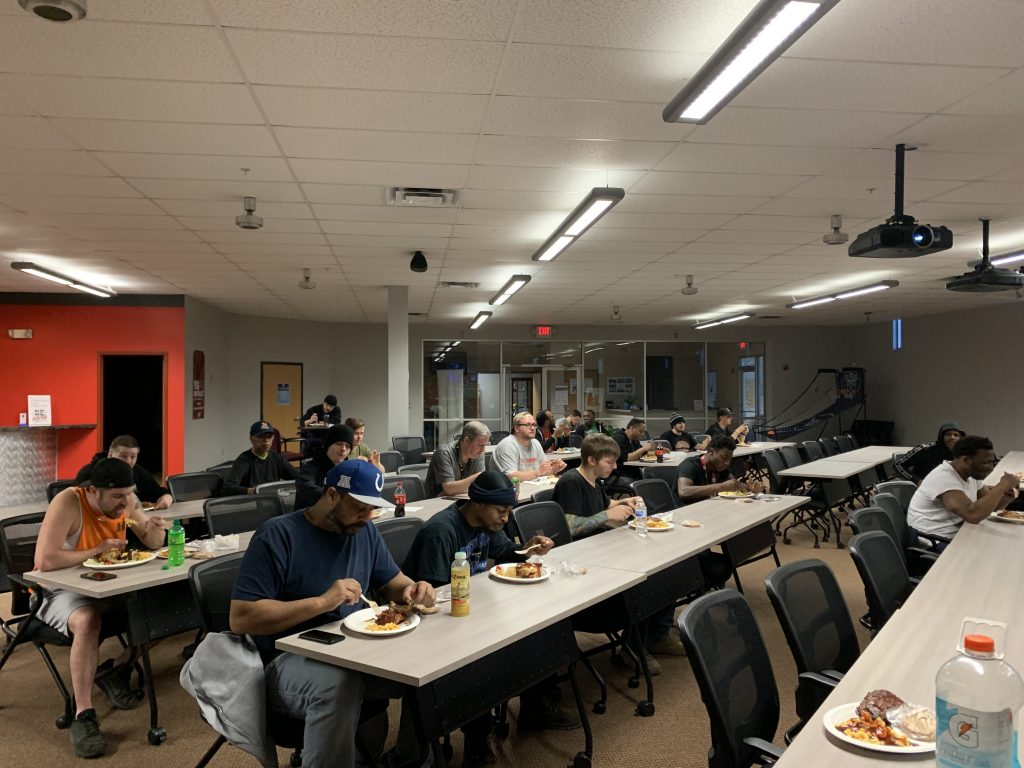 THE OV NIGHT CREW HAS BEEN PUTTING IN SOME LONG NIGHTS AND TO REWARD THEIR
GREAT WORK, THE CREW WAS TREATED TO LUNCH FROM THE MONTGOMERY INN BOATHOUSE. 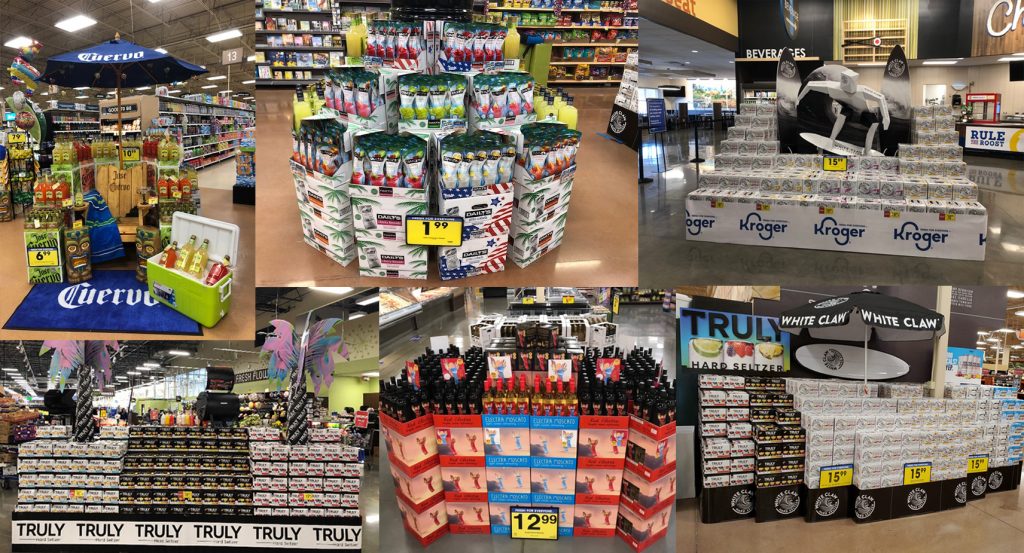 BOTH THE OV BEER AND WINE TEAMS HAVE DONE SOME FANTASTIC WORK BUILDING
SOME IMPRESSIVE “INSPIRED DISPLAYS” IN OFF PREMISE ACCOUNTS. 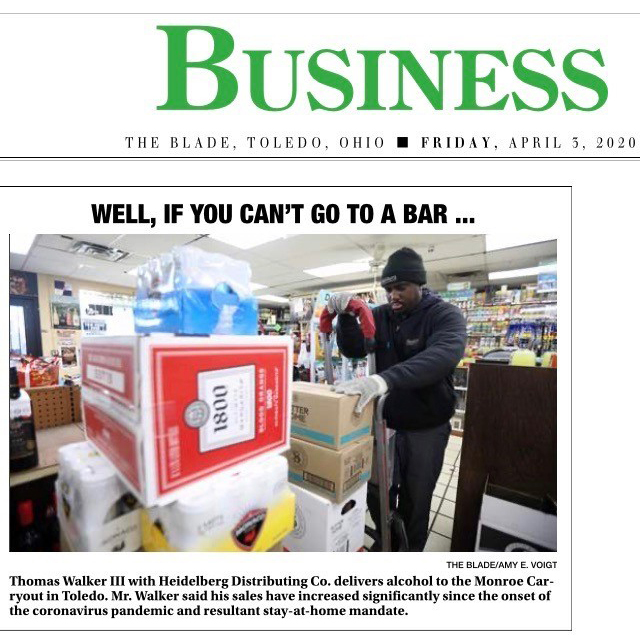 DRIVER TJ WALKER WAS FEATURED IN THE BUSINESS SECTION OF THE TOLEDO BLADE.
THE STORY WAS ABOUT THE INCREASED SALES AT OFF PREMISE ACCOUNTS DUE TO BARS
AND RESTAURANTS BEING CLOSED. TJ WILL CELEBRATE HIS 5-YEAR ANNIVERSARY WITH
HEIDELBERG THIS YEAR.

→ A big part of Heidelberg’s success as a company is having all the spokes of our wheel working together to get the job done. Operations Manager Steve Krohn has gotten some superstar type performances from his night crew, who stepped up to get the job done and to truly Be The Roar!

The Youngstown night shift typically operates with six Associates. Heading into one week, they were set to start the week out with just two on the crew. Three team members were out due to Covid-19 related issues and another was scheduled to be on vacation. Helen Bowman voluntarily canceled her pending vacation and both Marcie Helberg and Daniel Dennison stepped up to make sure that Steve and Team Youngstown got through a tough stretch. “Those three went out of their way to tell me that I can count on them to get us through everything,” Steve said.

To add to a tough situation, Youngstown was also breaking in a new operations night manager, Jose BonillaCumba. “Jose jumped right into this whole thing with very little training and led his team to success,” said Steve. “I am so proud of this team and what they have accomplished during this challenging time. Youngstown has been breaking every case record set since Heidelberg has taken over here. Thanks to this awesome group of Associates for their work in these rough times.”

→ Youngstown participated in the Second Harvest Food bank Telethon, in conjunction with an area television station. The event raised $29,000.

→ Wine Trends Launched a new brand, Eden Rift.  Their estate was the first vineyard planted in California and dates back to 1849. The winery has multiple varietals including: Pinot Noir, Zinfandel, Rosé of Pinot Noir, Chardonnay, Pinot Gris and Sauvignon Blanc.